The strength of PG Évaluation lies in a team of appraisers with the most complete expertise, supported by extensive documentation and knowledge based on years of experience.
This is why PG Évaluation is more than just a valuable opinion!

The beginning of a passion

1: My brother Marius and me on a 1950 Dodge, accompanied by my sister Marjolaine, at my grocer’s father shop in 1963.
2: My first car, bought with my brother Marius, a 1961 Lincoln
3: At 17 years old with my 1969 Cadillac DeVille convertible
4: 1965 442 during an exhibition at Ste-Thérèse with my brother Paul. He’s now one of the best classic car restorer in Quebec.

It all started at the end of the 1960s. My father owned a grocery store, and my brother and I were always excited when clients would come with their cars. We’d examine the cars from every angle whenever we had the chance—and even though we were still young, our favourite game was to guess the brand, model and year of these cars. Whenever my father bought a new car, we were thrilled. My passion for classic cars comes partly from my father, since new family cars could already be a few decades old. I can even say that the rest of my family shares this passion, since our uncles would hurry to visit us to show off their new toys.

When I was 8 years old and living near four new car dealerships, the arrival of new models was a big event for us. We’d take advantage of the occasion by picking up flyers that would go into our albums filled with pictures of our favourite models, which we’d carefully cut out. We even became the mascots for these dealerships, and their salespeople thought we were pretty funny.

In the 1970s, our father starting giving us lessons in mechanics and auto body. He would buy cars which we would then repair and resell. We loved doing this so much that we always felt a little sad to sell those cars. When we were only 14 and 16 years old, my brother and I convinced my father to let us buy a 1961 Lincoln Continental so we could restore it. Even though this project required a lot of work, it wasn’t a chore for us and it motivated us in a huge way.

That’s how our passion for classic cars developed and grew stronger. In the spring of 1976, my brother got a job at the Desrosiers Pontiac Buick Cadillac dealership in Saint-Jérôme; when summer vacation started, it was my turn to join as a technician. All of the employees, and even the owner, Mr. Paul Desrosiers, were impressed by our devotion and our passion for cars. We’d often have lunch with the parts salespeople and rummage through the parts and mechanics books and catalogues.

After working for dealerships for several years and in several capacities, I decided to take my career one step further by becoming a collision estimator in 1987. This job quickly led me to become an appraiser for classic cars. Throughout the years, my brothers and I have owned over 200 cars and restored many of them. Despite the problems and setbacks we faced, our passion for cars is just as strong as it was when we were 7, 10 and 25 years old!

You’d be hard-pressed to find a baby-boomer who hasn’t heard of the Craven “A” Foundation car collection. In the 1970s, the collection boasted an incredible range and quality of cars. It was also the collection seen the most in public with its cars gracing shopping malls, and was one of the rare Canadian collections to include the prestigious Duesenberg cars. 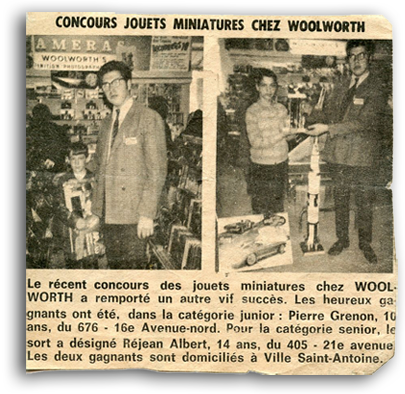 In 1972, at the age of 12 and already bored with building model cars, I discovered Hubley sets. The sets were made mostly of metal and were highly detailed; it didn’t take long for me to move from basic models like the Ford Model A to higher-end models like classic Packards.

With my brother and I winning many prizes in modeling contests, the owner of the convenience store where I would buy these sets noticed my passion and talent, and suggested I sell the models I assembled. The money I earned helped me buy 2 famous Duesenbergs, an SJ Dual Cowl and a Town Car, which were also on display.

One day, a small part of the Craven “A” collection was on display at the Galeries des Laurentides de St-Antoine. When the representative for the collection was putting up posters for the exhibit, he noticed my car collection at the convenience store. Imagine his surprise when he learned a 12-year-old had created these little masterpieces! Without a moment’s hesitation, he asked to meet me so he could offer me the chance to have my own stand to build a small-scale model of an SJ with an authentic, life-sized Duesenberg in the background. I thought I was dreaming! I wasted no time preparing the parts, since I couldn’t finish a complex model with over 150 parts in a single day. When the big day arrived, everything went off without a hitch, and several curious onlookers and journalists were on hand for the unveiling of the small-scale model of this rare and prestigious car.

Even at my tender age, this experience made me realize that I was meant to have a career in collectible cars. Today, I am probably the only professional in Quebec to have appraised 3 of these magnificent vehicles, among the most prestigious in the world.

When I was 17 years old and already having owned 4 cars (a 1961 Lincoln, a 1969 Cadillac limousine, a 1970 Lincoln coupe, and a 1969 Cadillac DeVille convertible which I was still owning), I noticed a car whose model I’d always loved for sale in my neighbourhood. It was a 1971 Buick Riviera, nicknamed “Boattail”, burnt-orange in colour with a luxurious white interior, bucket seats, and a console. The price was reasonable and, after several negotiations, I eventually bought it. My first drive in this famous model with such an unusual design was a revelation, from its precise handling and its power, unhindered by its heavy weight.

A year later, still in love with this car but still not a purist, I decided to paint it black and was happy with the result. Two years later and after a visit to the Sport Auto Show at Place Bonaventure, I discovered my strong penchant for Candy Apple paint. It didn’t take long for me to start restoring this car that was still only 9 years old. The vermilion colour with its golden base was stunning, and with all the chrome plating and restored bucket seats, the car turned quite a few heads.

A few years later, I wanted to repaint the car in a darker colour, which was no easy task since Candy Apple paint is more difficult to apply when working with shades of Brandy. The result: there were colour variations on a few panels. It would’ve been too expensive to start over. Disappointed with how things turned out, I chose to sell the car in order to buy other models I had set my sights on for a few years, like a 1975 442 with a 455-ci engine, a 1972 442 W-30 and a white 1965 442 with a 400-ci engine.

A few more models later in 1989, I couldn’t resist buying another 1972 Boattail in excellent condition, this time in silver but still with a black-and-white interior, bucket seats and a console. The trunk lid was different from the 1971 model, which was unique in that there were vents on the lid. In fact, several Chevrolet models that year like the Vega and Impala featured the same trunk cover features. Since I preferred the style of the 1971 model, I started looking for a trunk lid with vents, which I found at Pièces d’Autos Jutras in Blainville and in excellent condition. All that was left for me to do was paint it silver.

Not long after, a Laval dealer fell in love with my Riviera and offered me three and a half times the price I had originally paid. With my first baby on the way, I accepted his offer without having the chance to install the famous trunk lid I’d coveted. The trunk lid was stored in my garage attic in Saint-Lin-Laurentides and was quickly forgotten.

My brother and I owned several other cars, such as a 1966 GTO convertible originally in Blue Charcoal. Its original owner was Jacques Lemaire from the Montreal Canadiens, who had repainted it red in honour of the Habs. I still own that car today and it’s in the final phases of restoration. Since it was first painted in what I consider one of the rarest and most eye-catching colour combinations, I repainted it to its original factory colours.

Throughout the years, the Boattail still held a place in my heart, and I hoped to find another one someday. My wish came true recently: in October 2012, I finally found this magnificent car again. From California and with only 28,000 miles, it was in mint condition and did not need to be restored at all. Fully equipped, it was white with a black-and-white interior, bucket seats, a console—everything I’d hoped for. Since it had only been in Canada for a short time, it was fully documented, which made it easier for me to purchase.

In November 2012, I returned to my old house in Saint-Lin-Laurentides to meet with the current owner and asked him if I could take a quick look in the attic. Imagine my shock when, 23 years later, I saw that the famous vented trunk lid hadn’t moved an inch and had been well preserved! You can probably guess where it ended up shortly thereafter. This just goes to show that you can never forget your first love on wheels!